Ethanol (Ethyl Alcohol), C2H5OH, is a volatile, flammable, colorless liquid with a slight characteristic odor. It is produced via petrochemical processes or naturally by the fermentation of sugars by yeasts.

Ethanol is most commonly consumed as a popular recreational drug. It is a psychoactive substance and is the principal type of alcohol found in alcoholic drinks. It also has medical applications as an antiseptic and disinfectant. The compound is widely used as a chemical solvent, either for scientific chemical testing or in synthesis of other organic compounds. Ethanol is also used as a clean-burning fuel source.

The phase diagram of ethanol is shown below the table.

Chemical, physical and thermal properties of ethanol:
Values are given for liquid at 25oC /77oF / 298 K and 1 bara, if not other phase, temperature or pressure given.

Follow the links below to get values for the listed properties of ethanol at varying pressure and temperature:

Ethanol is a liquid at standard conditions. However, at low temperature and/or very high pressures it becomes a solid. 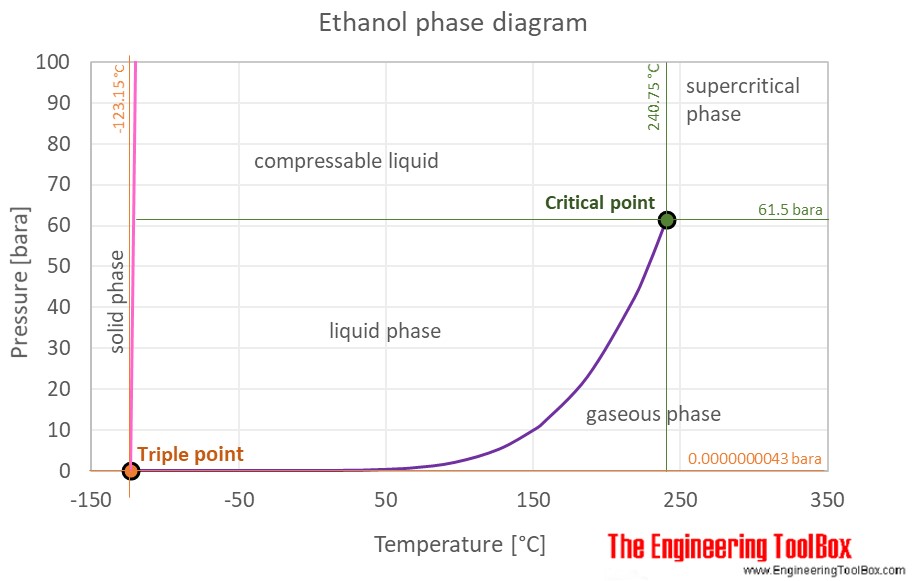