Hydrogen sulfide, H2S, is a highly toxic and flammable, colorless gas with a characteristic odor of rotten eggs. It is used in the manufacture of chemicals, in metallurgy, and as an analytical reagent.  It is heavier than air and tends to accumulate at the bottom of poorly ventilated spaces. Although very pungent at first, it quickly deadens the sense of smell.

Hydrogen sulfide occurs naturally in crude petroleum, natural gas, volcanic gases, and hot springs. It can also result from bacterial breakdown of organic matter. It is also produced by human and animal wastes.

Hydrogen sulfide is used in the manufacture of chemicals, in metallurgy, and as an analytical reagent.

The phase diagram of hydrogen sulfide is shown below the table.

Chemical, physical and thermal properties of hydrogen sulfide:
Values are given for gas phase at 25oC /77oF / 298 K and 1 bara, if not other phase, temperature or pressure given.

Hydrogen sulfide is a gas at standard conditions. However, at low temperature and/or high pressures the gas becomes a liquid or a solid. 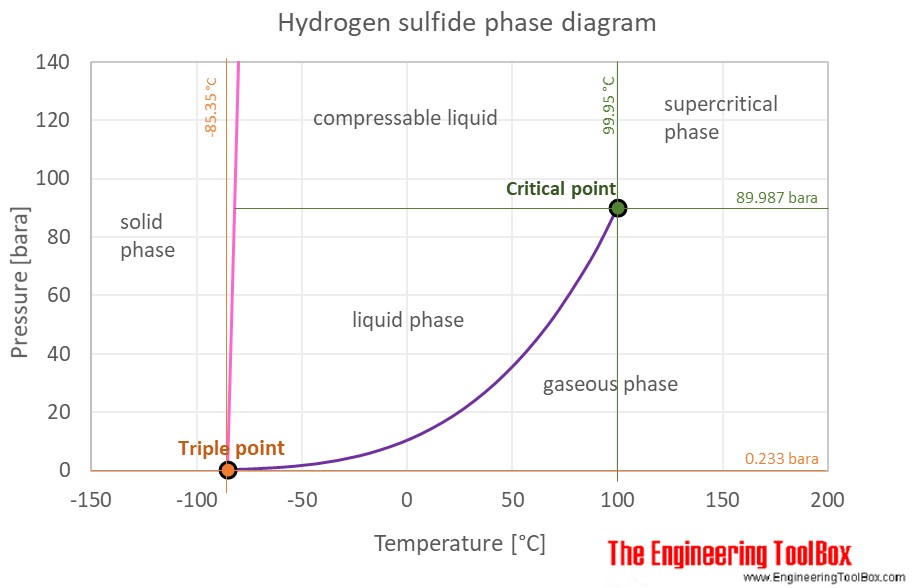