Viscosity is an important fluid property when analyzing liquid behavior and fluid motion near solid boundaries. The viscosity of a fluid is a measure of its resistance to gradual deformation by shear stress or tensile stress. The shear resistance in a fluid is caused by inter-molecular friction exerted when layers of fluid attempt to slide by one another.

There are two related measures of fluid viscosity

Absolute viscosity - coefficient of absolute viscosity - is a measure of internal resistance. Dynamic (absolute) viscosity is the tangential force per unit area required to move one horizontal plane with respect to an other plane - at an unit velocity - when maintaining an unit distance apart in the fluid.

Shear stress can be expressed

Equation (1) is known as the Newtons Law of Friction.

(1) can be rearranged to express Dynamic viscosity as

In the SI system the dynamic viscosity units are N s/m2, Pa s or kg/(m s) - where

Dynamic viscosity may also be expressed in the metric CGS (centimeter-gram-second) system as g/(cm s), dyne s/cm2 or poise (p) where

This is a free app that can be used offline on mobile devices.

Degree Engler is used in Great Britain as a scale to measure kinematic viscosity. Unlike the Saybolt and Redwood scales, the Engler scale is based on comparing the flow of the substance being tested to the flow of another substance - water. Viscosity in Engler degrees is the ratio of the time of a flow of 200 cubic centimeters of the fluid whose viscosity is being measured  - to the time of flow of 200 cubic centimeters of water at the same temperature (usually 20oC but sometimes 50oC or 100oC) in a standardized Engler viscosity meter.

A fluid where the shearing stress is linearly related to the rate of shearing strain - is designated as a Newtonian Fluid.

A Newtonian material is referred to as true liquid since the viscosity or consistency is not affected by shear such as agitation or pumping at a constant temperature. Most common fluids - both liquids and gases - are Newtonian fluids. Water and oils are examples of Newtonian liquids.

A Shear-thinning or pseudo-plastic fluid is a fluid where the viscosity decrease with increased shear rate. The structure is time-independent.

Ketchup and mayonnaise are examples of thixotropic materials. They appear thick or viscous but are possible to pump quite easily.

A Shear Thickening Fluid - or Dilatant Fluid - increases the viscosity with agitation or shear strain. Dilatant fluids are known as non-Newton fluids.

Some dilatant fluids can become almost solid in a pump or pipe line. With agitation cream becomes butter and candy compounds. Clay slurry and similar heavily filled liquids do the same thing.

A Bingham Plastic Fluid has a yield value which must be exceeded before it will start to flow like a fluid. From that point the viscosity decreases with increasing agitation. Toothpaste, mayonnaise and tomato ketchup are examples of such products.

The absolute viscosity can be calculated as

Viscosity of some Common Liquids

Kinematic viscosity can be converted from SSU to Centistokes with

Kinematic viscosity of fluids like water, mercury, oils SAE 10 and oil no. 3 - and gases like air, hydrogen and helium are indicated in the diagram below. Note that 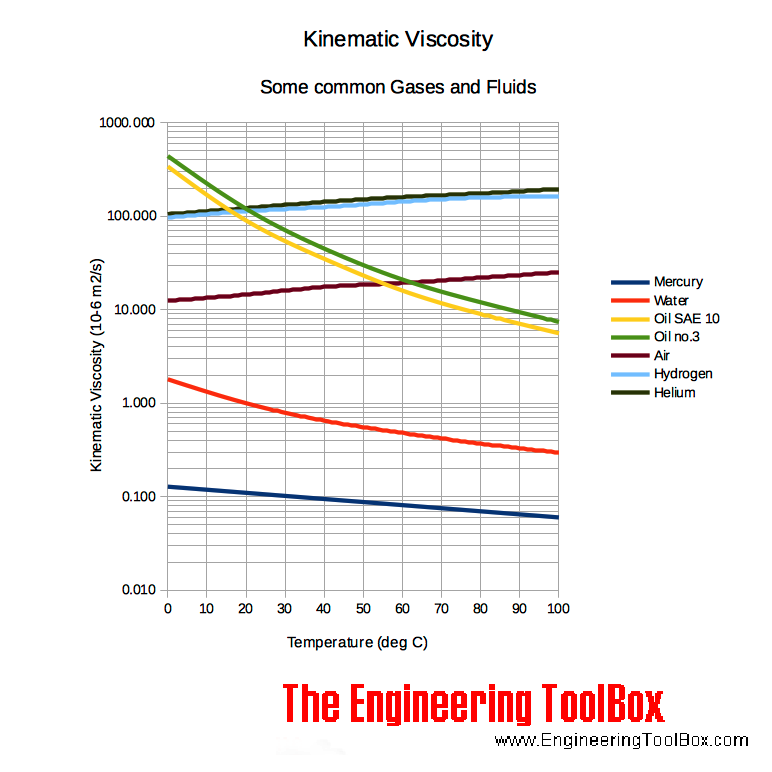 Three types of devices are used to measure viscosity