Mass vs. weight - the Gravity Force.

Mass and Weight are two often misused and misunderstood terms in mechanics and fluid mechanics.

Mass is a measure of the amount of material in an object, being directly related to the number and type of atoms present in the object. Mass does not change with a body's position, movement or alteration of its shape, unless material is added or removed. 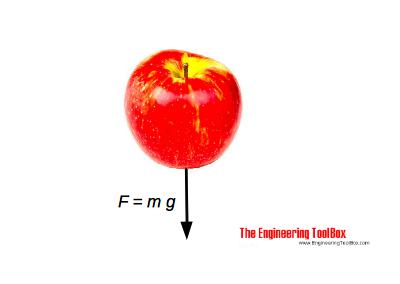 Weight is the gravitational force acting on a body mass. The generic expression of Newton's Second Law (1) can be transformed to express weight as a force by replacing the acceleration - a - with the acceleration of gravity - g - as

Example - The Weight of a Body on Earth vs. Moon

The handling of mass and weight depends on the systems of units used. The most common unit systems are

In the SI system the mass unit is the kg and since the weight is a force - the weight unit is the Newton (N). Equation (2) for a body with 1 kg mass can be expressed as:

The British Gravitational System (Imperial System) of units is used by engineers in the English-speaking world with the same relation to the foot - pound - second system as the meter - kilogram - force second system (SI) has to the meter - kilogram - second system. For engineers who deals with forces, instead of masses, it's convenient to use a system that has as its base units length, time, and force, instead of length, time and mass.

The three base units in the Imperial system are foot, second and pound-force.

In the BG system the mass unit is the slug and is defined from the Newton's Second Law (1). The unit of mass, the slug, is derived from the pound-force by defining it as the mass that will accelerate with 1 foot per second per second when a 1 pound-force acts upon it:

In other words, 1 lbf (pound-force) acting on 1 slug of mass will give the mass an acceleration of 1 ft/s2.

In the English Engineering system of units the primary dimensions are are force, mass, length, time and temperature. The units for force and mass are defined independently

Since the EE system operates with these units of force and mass, the Newton's Second Law can be modified to

or transformed to weight (force)

The proportionality constant gc makes it possible to define suitable units for force and mass. We can transform (4) to