"Change of motion is proportional to the force applied, and take place along the straight line the force acts."

The force caused by gravity - ag - is called weight.

The acceleration of gravity can be observed by measuring the change of velocity related to change of time for a free falling object:

Acceleration of Gravity in SI Units

Acceleration of Gravity in Imperial Units

Velocity and Distance Traveled by a Free Falling Object

The velocity for a free falling object after some time can be calculated as:

The distance traveled by a free falling object after some time can be expressed as:

The velocity and distance traveled by a free falling object:

Note! Velocities and distances are achieved without aerodynamic resistance (vacuum conditions). The air resistance - or drag force - for objects at higher velocities can be significant - depending on shape and surface area. 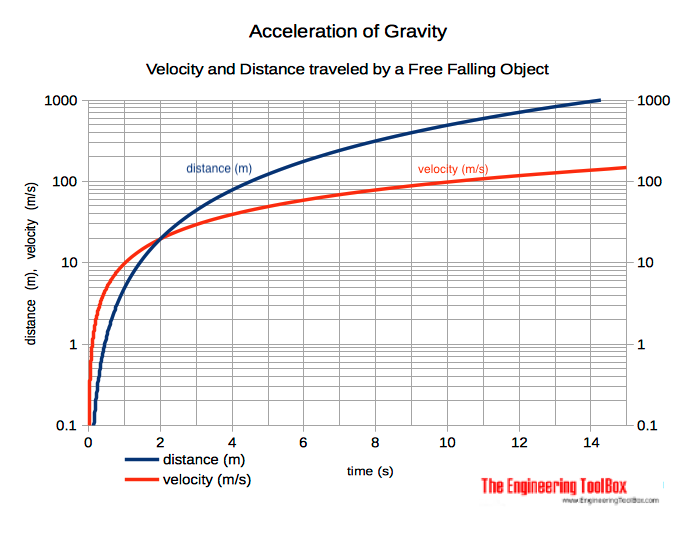 A stone is dropped from 1470 ft (448 m) - approximately the height of Empire State Building. The time it takes to reach the ground (without air resistance) can be calculated by rearranging (4):

The velocity of the stone when it hits the ground can be calculated with (3):

Example - A Ball Thrown Straight Up

A ball is thrown straight up with an initial velocity of 25 m/s. The time before the ball stops and start falling down can be calculated by modifying (3) to

"To every action there is always an equal reaction - if a force acts to change the state of motion of a body, the body offers a resistance equal and directly opposite to the force."

Latitude and Acceleration of Gravity