Air is used in product drying processes for heat and vapor transport.

It is common to transfer heat required to evaporate water from a product from heating coils in a dryer to the drying products by the continuously circulation of air. Evaporated water vapor from the product is removed by replacing some of the circulating air with fresh make-up air with lower specific moisture content.

Note! The drying force is not a force as known from the mechanics (Newton). It express the most import variable for the vapor carrying capacity of humid air.

The table below indicates vapor saturation pressure related to temperature.

Example - The Drying Force of Air

With the saturation pressure from the table above and the expression for relative humidity the vapor pressure in (A) can be expressed as:

The drying force in A can be calculated as:

Heating the air from A to B don't change the moisture content. The vapor pressure remains constant but the saturation pressure increases. The relative humidity decreases to 19% - the Mollier diagram.

The vapor pressure in B can be calculated as:

The drying force in B can be calculated as:

Comparing A and B the "Drying Force" has increased from 12.5 mbar to 53.1 mbar. This has the double effect

Saturated Air and Mass of Water 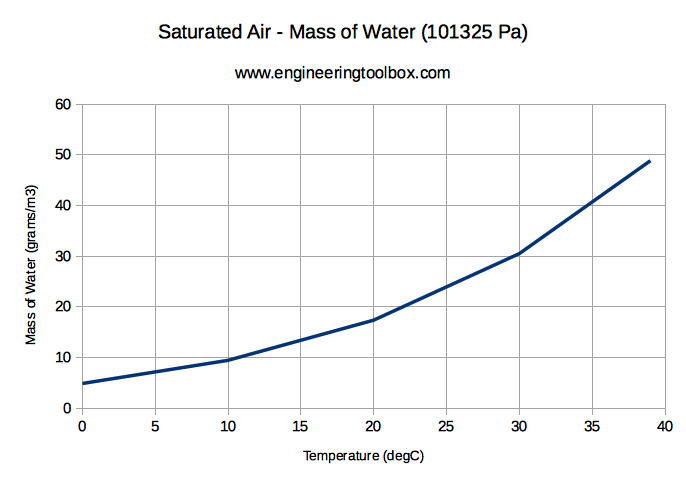