Centripetal and Centrifugal Acceleration and Force

Forces due to circular motion and centripetal / centrifugal acceleration.

Centripetal and Centrifugal Force are the action-reaction force pair associated with circular motion. 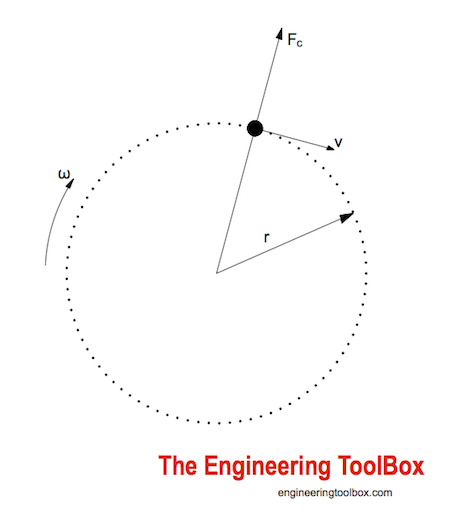 Velocity is a vector - specifying how fast (or slow) a distance is covered and the direction of the movement. Since the velocity vector (the direction) of a body changes when moved in a circle - there is an acceleration.

According Newton's second law the centripetal force can be expressed as

According to Newton's Third Law the centripetal force acting on the object has a centrifugal force of the same magnitude acting in the opposite direction.

A car with mass 1000 kg drives through a curve with radius 200 m at speed 50 km/h. The centripetal acceleration can be calculated as

The centripetal force can bee calculated as

Related to the gravity force - weight:

A car with weight (gravity force) 3000 lb travels through a curve with radius 100 ft with speed 15 miles/h.

The mass of the car can be calculated as

The centripetal acceleration can be calculated as

The centripetal force can bee calculated as

This calculator can be used if the velocity of an object is known - like a car in a turning curve. 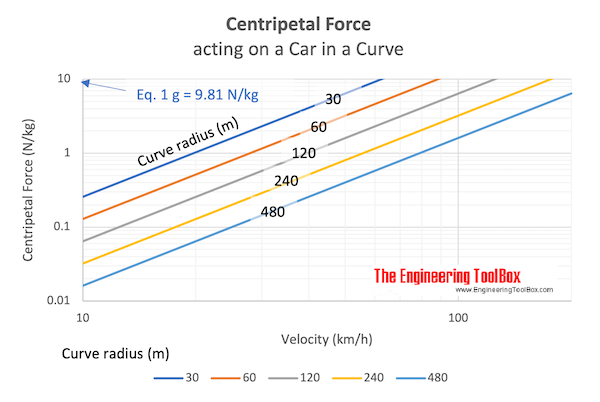 This calculator can be used if revolution speed of an object is known - like a turning bowl in a lathe.

Force is an abstraction representing the push and pull interaction between objects.  Newton's third law states that

Therefore there must be an equal and opposite reaction force to the Centripetal Force - the Centrifugal Force.