The momentum of a body is the product of its mass and velocity - recoil calculator. 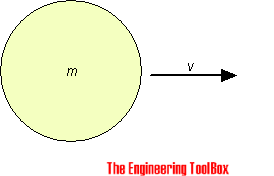 The momentum of a body can be expressed as

The momentum of a body remains the same as long as there is no external forces acting on it. The principle of conservation of momentum can be stated as

the total linear momentum of a system is a constant

u = velocities of bodies after collision (m/s, ft/s)

A rifle weighing 6 lb fires a bullet weighing 0.035 lb with muzzle speed 2100 ft/s. The total momentum of the rifle and bullet can be expressed as

The recoil kinetic energy in the rifle can be calculated as

Angular momentum for a rotating body can be expressed as

I = moment of inertia - an object's resistance to changes in rotation direction (kg m2, slug ft2)

The conservation of angular momentum can be expressed as

A small iron sphere rotates around an axis with velocity 100 rpm when connected to a rope with length 1.5 m. The rope is extended to 2.5 m and due to conservation of angular momentum the new velocity can be calculated by modifying 4f to