Stress is the ratio of applied force F to a cross section area - defined as "force per unit area". 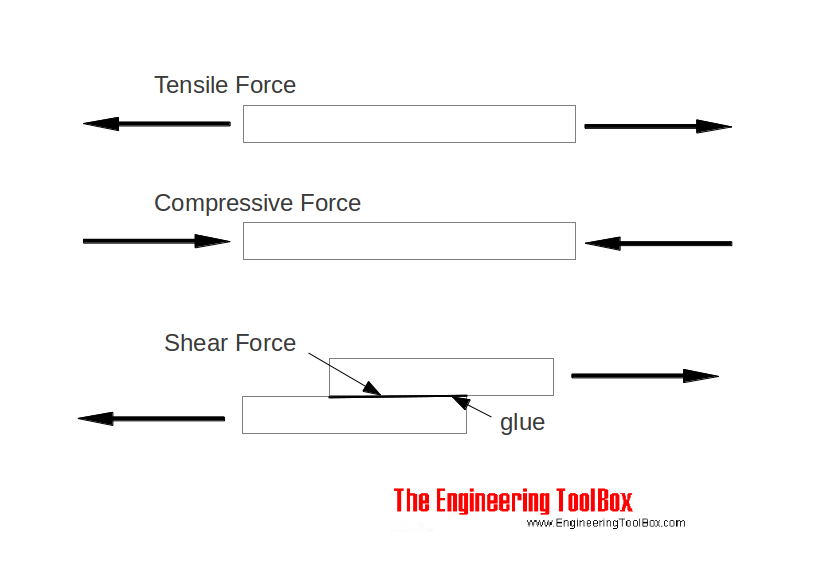 A normal force acts perpendicular to area and is developed whenever external loads tends to push or pull the two segments of a body.

A force of 10 kN is acting on a circular rod with diameter 10 mm. The stress in the rod can be calculated as

A compressive load of 30000 lb is acting on short square 6 x 6 in post of Douglas fir. The dressed size of the post is 5.5 x 5.5 in and the compressive stress can be calculated as

Fp = shear force in the plane of the area (N, lbf)

A shear force lies in the plane of an area and is developed when external loads tend to cause the two segments of a body to slide over one another.

Strain is defined as "deformation of a solid due to stress".

Normal strain and can be expressed as

Example - Stress and Change of Length

The rod in the example above is 2 m long and made of steel with Modulus of Elasticity 200 GPa (200 109 N/m2). The change of length can be calculated by transforming (3) to

Stressing an object stores energy in it. For an axial load the energy stored can be expressed as

Fp = force parallel to the faces which they act

s = displacement of the faces (m, in)

d = distance between the faces displaced (m, in)

The Bulk Modulus Elasticity - or Volume Modulus - is a measure of the substance's resistance to uniform compression. Bulk Modulus of Elasticity is the ratio of stress to change in volume of a material subjected to axial loading.

Elastic moduli for some common materials: