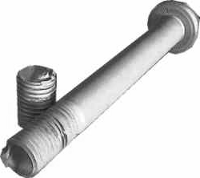 Fractures due to fatigue is common in cyclic loaded parts like connected rods, crankshafts, turbine blades, railroad wheels and so on. Fractures occur at stress less than the material Yield Stress.

Most steels have an endurance or fatigue limit about half the Tensile Strength.

The time dependent deformation due to heavy load over time is known as creep.

In general both stress and temperature influence on the rate of creep.Normally creep strength decreases with temperature.

Allowable creep strain can be specified - typical 0.1 %/year for steel bolts and piping