Density of the mix of dry air and water vapor - moist humid air.

The density of humid air varies with water content and temperature. When the temperature increases a higher molecular motion results in expansion of volume and a decrease of density.

The density of a gas, dry air, water vapor - or a mixture of dry air and water vapor like moist or humid air - can be calculated with the Ideal Gas Law.

The density of dry air can be calculated

The density of the water vapor can be calculated

The amount of water vapor in air influences the density. Water vapor is relatively light compared to diatomic Oxygen and diatomic Nitrogen - the dominant components in air.

When vapor content increases in moist air the amount of Oxygen and Nitrogen are decreased per unit volume and the density of the mix decreases since the mass is decreasing.

The gas constant ratio between water vapor and air is

Note! As we can see from (6) - increased moisture content reduces the density of moist air - dry air is more dense than moist air. 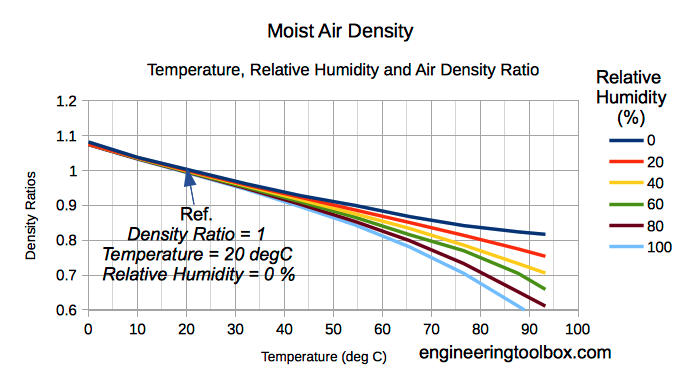