Air in the steam will cause the temperatures on heat-exchangers surfaces to be lower than expected due to the saturation temperatures in the steam tables. The heat transfer will be reduced and the system efficiency will be decreased.

Air in steam can be described with the "Daltons Law of Partial Pressure".

The total pressure of a mixture of gases is made up by the sum of the partial pressures of the components in the mixture as known from Dalton's Law of Partial Pressures:

The total pressure in a mixture of steam and air can be expressed as:

The Partial Pressure in a Mixture

Example - Mix of Air and Steam

The effective pressure in a steam/air mixture made up by 3 parts steam and 1 part air, with total pressure 5 bar absolute, can be expressed as:

Important! Since the steam has an effective pressure of 3.75 bar instead of the pressure of 5 bar a, the mixture would have a temperature of approximately 139 oC rather than the expected saturation temperature of 152 oC. This has a major effect on the heat transfer capability of an heat exchanger. 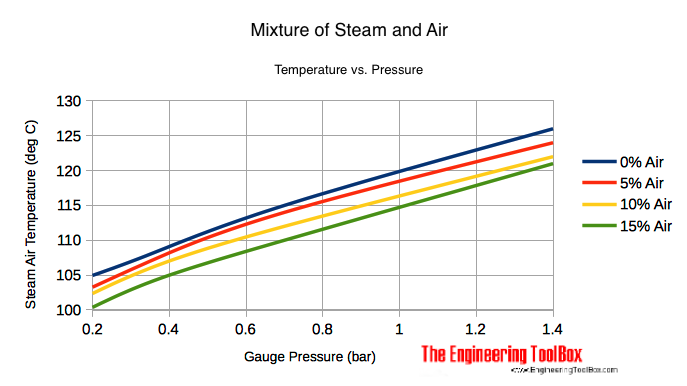