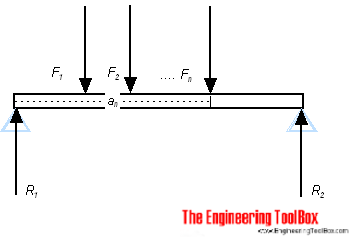 The calculator below can be used to calculate the support forces - R1 and R2 - for beams with up to 6 asymmetrically loads.

For a beam in balance loaded with weights (or other load forces) the reactions forces - R - at the supports equals the load forces - F. The force balance can be expressed as

In addition for a beam in balance the algebraic sum of moments equals zero. The moment balance can be expressed as

A 10 m long beam with two supports is loaded with two equal and symmetrical loads F1 and F2 , each 500 kg. The support forces F3 and F4 can be calculated

the equation above can be simplified to

- free apps for offline use on mobile devices.

Example - A beam with two not symmetrical loads

The algebraic sum of moments (2) can be expressed as

F3 can be calculated as: 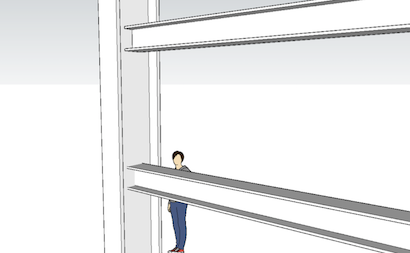