Definition, explanation and examples of calculation of various types of average boiling point of petroleum products and other mixtures of hydrocarbons: VABP, MABP, WABP, CABP and MeABP

Boiling point: The temperature at which a liquid turns into a gas

A mixture of different compounds boils over a certain range of temperature, reflecting the boiling point of each specific compound present in the mixture. For many purposes, it is suitably to calculate an average boiling point (ABP) of mixtures.

Gasoline consists of branched paraffins, cycloparaffins and aromatics with carbon numbers typically from C4 to C12.

A "simple" gasoline could then contain a mixture of iso-pentane, 3-methylpentane, iso-octane, meta-xylene and hexylcyclohexane. The table below shows calculations of the different kinds of average boiling points of a mixture containing the given volume fractions of the five compounds

However, a real gasoline contains hundreds of different compounds with individual properties, and a similar calculation is not possible to performe due to the complexity and lack of precise analytical tools.

The way to get past this restriction is to use a distillation curve obtained using a real distillation, as ASTM D86, or a gas chromatographic analysis, as ASTM D2887, to calculate VABP or WABP and then, use agreed correction factors to find the other kinds of ABPs. 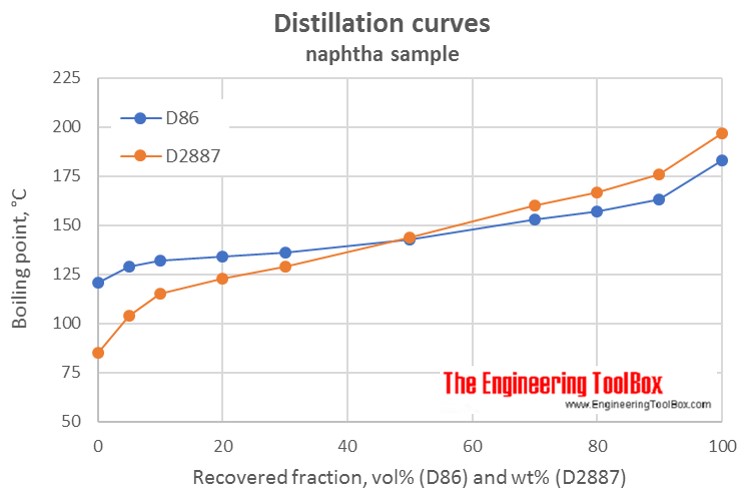 The table below shows results from a D86 and a D2887 analysis of a naphtha sample, and the calculated VABP and WABP and the slopes for the distillation curves, using the formulas:

Correction factors are found by using the figures below. Note! The figures are using °C or °F, and results from D86.

The narrower the cut of the oil fraction (smaller slope), the smaller is the correction.

The correction from a VABP of 294°F to CABP is only -1.5°F for a sample with a slope of 0.7°F/% recovered. (To see more detailes, right hand click on the figure and choose view image)