For pure compounds the following definitions can be given:

Melting point is mainly a parameter that is needed for predicting solid-liquid phase behavior, especially for waxy oils. Equations developed by Riazi and Sahhaf for various homologous hydrocarbon groups can be used to estimate melting or freezing point of pure hydrocarbons with good accuracy (error of 1-1.5%) for practical calculations: 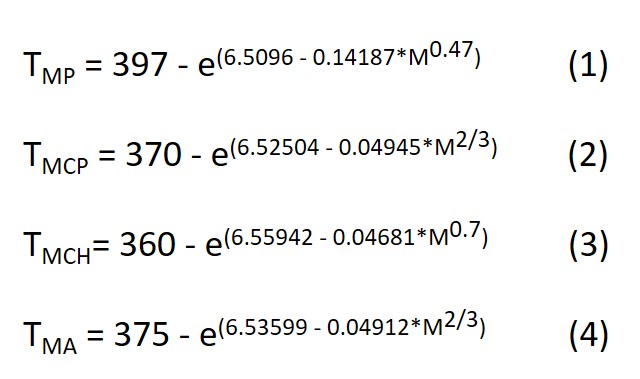 The figure shows calculated melting points (°C and °F) for the different kinds of hydrocarbons at varying molecular weights, compared to measured values:


Example 2: Melting and freezing point of a hydrocarbon mixture

First, the average melting/freezing point of each hydrocarbon group is calculated:

Since this is a mixture of compounds, and the average melting/freezing point is calculated from average molecular weights, the real melting and freezing will occur over a temperature range.
The solid wax will start to melt somewhat below 51 °C during heating, and the liquid wax will start to freeze somewhat above 65 °C during cooling. How far from the given temperatures it melts or freezes will depend on the width of the molecular weight range of the wax.