Humidifying (increasing moisture) of ventilation systems air can be done with

Warning! The water-borne bacteria causing the legionnaires disease1) (legionella) may develop in humidifying water systems. The bacteria may be transferred to humans by the circulating air. Note that proper water treatment with chlorine dioxide or similar products to avoid the danger is vital!

In a sprayed coil unit water is discharged through high pressure nozzles into the air stream on to a finned coil. The coil provides additional surface where the water can evaporate into the air. The coil may also be heated to increase the evaporation.

Water droplets not evaporated are collected by filter plates downstream. Excess water is collected at the base and circulated to the high pressures nozzles by a pump.

The air velocity through a humidifying unit of this type is approximately 2 - 3.5 m/s.

In a spinning disc water flows as a fine film over the surface of a rapidly revolving vertical disc. Water is thrown of the disc by centrifugal action onto a toothed ring and broken up into fine particles evaporating in the air flow.

Humidifying with Water - the Psychrometric Chart

When water is added and evaporated by the heat in the air - the process will follow the constant enthalpy line - approaching the saturation line. 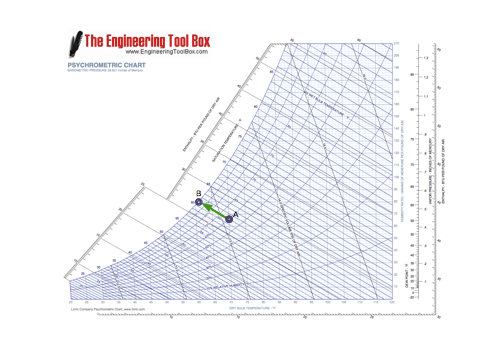 Humidifying with Water - the Mollier Diagram 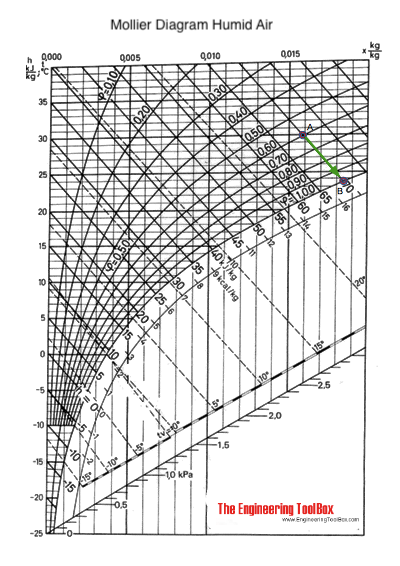 In a steam humidifier a hot water generator delivers low pressure steam to a perforated distribution tube inserted into the air flow.

Since the water is boiled and not "reused", the risk for transferring water born bacteria - as legionella - to the air is minimal.

When steam is added to the air - enthalpy increases - and depending on the temperature and amount of the steam and - the process follows a direction as indicated in the diagrams below. When adding saturated steam at atmospheric pressure the temperature rise is very small - in general less than 1oC (1oF). For practical purposes the process of adding saturated steam at atmospheric pressure approximates the horizontal temperature line in the Mollier diagram and vertical line in the psychrometric chart.

Humidifying with Steam - the Psychrometric Chart 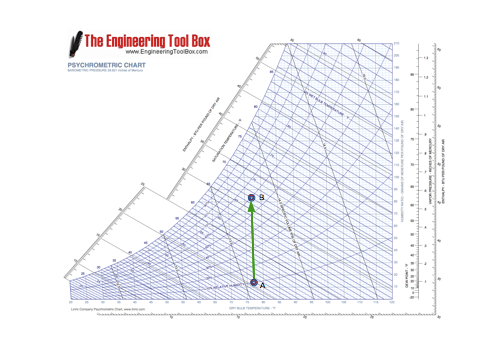 Humidifying with Steam - the Mollier Diagram 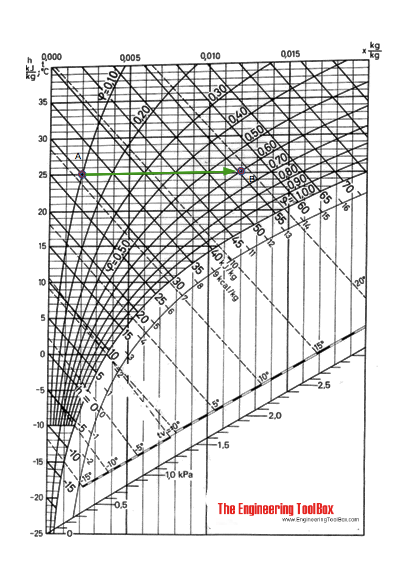