The power factor of an AC electric power system is defined as the ratio active (true or real) power to apparent power, where

Reactive power is required for the magnetization of an electric motor but does not perform any work. Reactive power required by inductive loads increases the amounts of apparent power -  and the required supply to the grid from the power supplier to the distribution system.

It is common to define the Power Factor - PF - as the cosine of the phase angle between voltage and current - or the "cosφ": 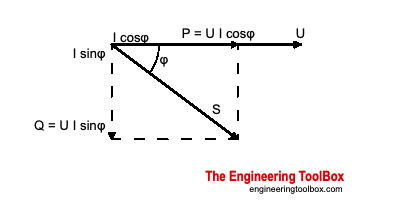 The power factor defined by IEEE and IEC is the ratio between the applied active (true) power - and the apparent power, and can in general be expressed as:

A low power factor is the result of inductive loads such as transformers and electric motors. Unlike resistance loads creating heat by consuming kilowatts, inductive loads require a current flow to create magnetic fields to produce the desired work.

Power factor is an important measurement in electrical AC systems because

International standards such as IEC 61000-3-2 have been established to control current waveform distortion by introducing limits for the amplitude of current harmonics.

of real power is consumed by the system. If the power factor is close to 1 (a purely resistive circuit) the supply system with transformers, cables, switch-gear and UPS could be made considerably smaller.

A Power Factor is usually stated as "leading" or "lagging" to show the sign of the phase angle.

Inductive and capacitive loads stores energy in magnetic or electric fields in the devices during parts of the AC cycles. The energy is returned back to the power source during the rest of the cycles.

In systems with mainly inductive loads - typically industrial plants with many electric motors - the lagging voltage are compensated with capacitor banks.

Power Factor for a Three-Phase Motor

The power factor for a three-phase electric motor can be expressed as:

U, l and cos φ are normally quoted on the motor nameplate. 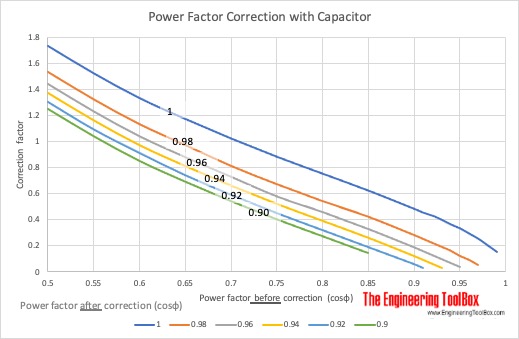 An electrical motor with power 150 kW has power factor before improvement cosΦ = 0.75.

For a required power factor after improvement cosΦ = 0.96 - the capacitor correction factor is 0.58.

The required KVAR capacity can be calculated as