For oxygen containing organic compounds this is given: pKa (the negative logarithm of the acid dissociation constant), molecular structures, molar weights, density and melting and boiling points.

Definitions of the acid dissociation constant and pKa are given below the figures, together with the definition of some classes of organic acids.

In the table below, pKa1 and pKa2 for water solutions at 25°C are given together with boiling and melting point, density and molecular weight, as well as number of carbon, hydrogen and oxygen atoms in each molecule.

Below the table, figures showing the fractions of the different acid forms in aqueous solutions at varying pH are given for some common diprotic organic acids (values calculated from the tabulated pKas).

See also boiling and melting point of hydrocarbons, alcohols and acids,  pKa of amines, diamines and cyclic organic nitrogen compounds and pKa of inorganic acids and bases, as well as acid base indicators,  Acid-base properties of aqueous solutions of salts with ions from both acids and bases and Buffer solutions

For full table with Common Names, Boiling temperatures and Densities - rotate the screen!

where HA is an acid that dissociates into A-, (known as the conjugate base of the acid) and a hydrogen ion which combines with a water molecule to make a hydronium ion.

The chemical species HA, A- and H3O+ are said to be in equilibrium when their concentrations do not change with the passing of time. The dissociation constant is usually written as a quotient of the equilibrium concentrations (in mol/L), denoted by [HA], [A-] and [H3O+]

In all, but the most concentrated, aqueous solutions of an acid the concentration of water can be taken as constant and can be ignored. The definition can then be written more simply

This is the definition in common usage. For many practical purposes it is more convenient to discuss the logarithmic constant, pKa

The larger the value of pKa, the smaller the extent of dissociation at any given pH - that is, the weaker the acid.

A weak acid has a pKa value in the approximate range -2 to 12 in water.

Strong acids has pKa values of less than about -2; the dissociation of a strong acid is effectively complete such that concentration of the undissociated acid is too small to be measured. pKa values for strong acids can, however, be estimated by theoretical means.

After rearranging the expression defining Ka, and putting pH = -log10[H+], one obtains

Then, a solution with 50% dissociation has pH equal to the pKa of the acid.

Polyprotic acids are acids that can lose more than one proton. Then we have more than one dissiciation constant; Ka1, Ka2, etc..  and similar pKa1, pKa2, etc.

All data given in the figures apply to dilute aqueous solutions at ambient temperature.

The figure below shows the fractions of the different acid forms (H2A, HA- and A2- for twoprotic acids) in aqueous solutions at varying pH: 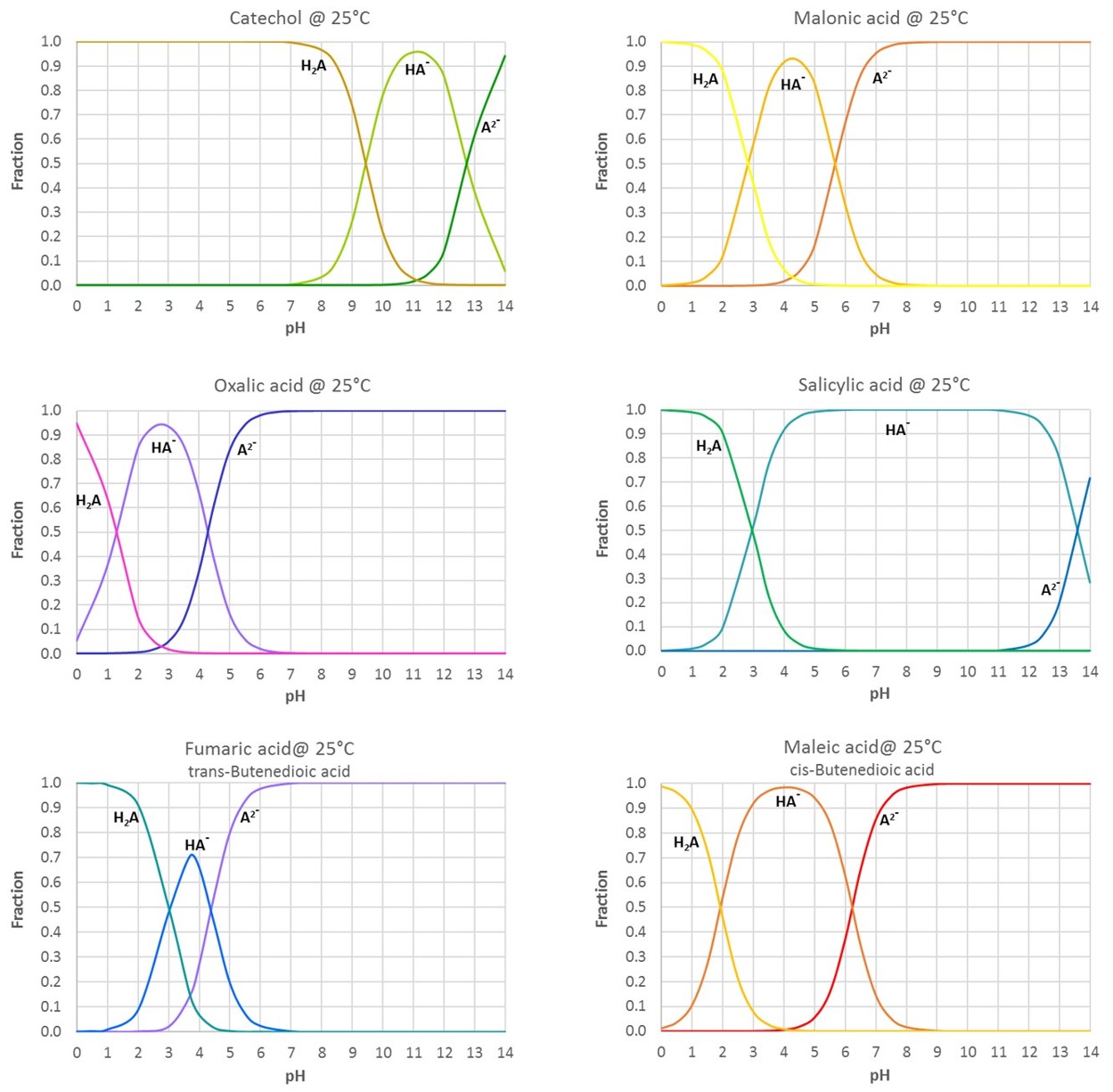 Aromatic hydrocarbon: A cyclic (ring-shaped), planar (flat) molecule with a ring of resonance bonds that exhibits more stability than other geometric or connective arrangements with the same set of atoms. The simplest of the aromatics have 6 carbon atoms and contains 3 double bounds.  A one ring aromatic without any substituents is called benzene, with the formula C6H6.

Alkyl: An alkyl group is an alkane substituent missing one hydrogen, with general formula CnH2n+1.

Alcohol: An organic compound in which the hydroxyl functional group (–OH) is bound to a saturated carbon atom.

Alkanol: An alcohol where the hydroxyl group is bound to an alkyl group, with the general formula CnH2n+1OH.

Phenol: An alcohol where the hydroxyl group is bound to a phenyl group, with the formula C6H5OH.

Phenols: A group of compounds consisting of a phenol molecule with one or more substiuents.

Carboxylic acid: an organic compound that contains a carboxyl group (C(=O)OH). The general formula of a carboxylic acid is R–COOH, with R referring to the rest of the molecule.

Paraffinic acid = Alkanoic acid: A carboxylic acid where the R is an alkyl group.

Benzoic acid: A carboxylic acid where the acid group is substituted to one carbon of a benzene ring.

Hydroxy acid: An carboxylic acid containing an additional hydroxy group (-OH), substistuted to another carbon atom than the acid group.