of the pump as a result. Boiling starts when the pressure in the liquid is reduced to the vapor pressure of the fluid at the actual temperature. 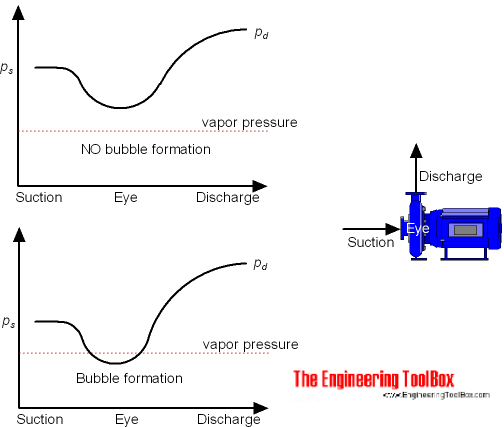 To characterize the potential for boiling and cavitation the difference between

Based on the Energy Equation - the suction head in the fluid close to the impeller*) can be expressed as the sum of the static and velocity head:

hs = suction head close to the impeller (m, in)

The liquids vapor head at the actual temperature can be expressed as:

The Net Positive Suction Head - NPSH - can be defined as

and can be expressed as

The Net Positive Suction Head available from the application to the suction side of a pump is often named NPSHa. The NPSHa can be estimated during the design and the construction of the system, or determined experimentally by testing the actual physical system. 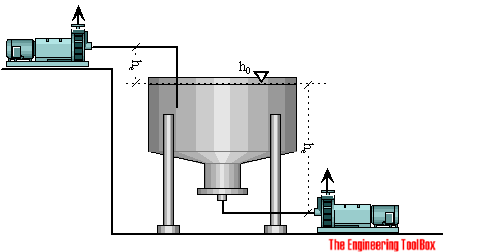 The available NPSHa can be estimated with the Energy Equation.

hs = head before the impeller (m, in)

hl = head loss from the surface to impeller - major and minor loss in the suction pipe (m, in)

In an open tank the head at the surface can be expressed as:

For a closed pressurized tank the absolute static pressure inside the tank must be used.

The head before the impeller can be expressed as:

he = elevation from surface to pump - positive if pump is above the tank, negative if the pump is below the tank (m, in)

The head available before the impeller can be expressed as:

or as the available NPSHa:

Available NPSHa - the Pump is above the Tank

At some level the NPSHa will be reduced to zero and the fluid will start to evaporate.

Available NPSHa - the Pump is below the Tank

It's always possible to increase the NPSHa by lowering the pump (as long as the major and minor head loss due to a longer pipe don't increase it more). Note! It is important - and common - to lower a pump when pumping a fluid close to evaporation temperature.

The NPSHr, called as the Net Suction Head as required by the pump in order to prevent cavitation for safe and reliable operation of the pump.

The required NPSHr for a particular pump is in general determined experimentally by the pump manufacturer and a part of the documentation of the pump. 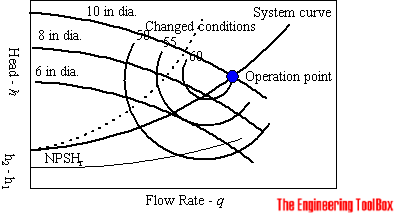 The available NPSHa of the system should always exceeded the required NPSHr of the pump to avoid vaporization and cavitation of the impellers eye. The available NPSHa should in general be significant higher than the required NPSHr to avoid that head loss in the suction pipe and in the pump casing, local velocity accelerations and pressure decreases, start boiling the fluid on the impellers surface.

Note that required NPSHr increases with the square of capacity.

When elevating a pump located above a tank (lifting the pump) - the fluid starts to evaporate at the suction side of the pump at what is the maximum elevation for the actual temperature of the pumping fluid.

For an optimal theoretical condition we neglect major and minor head loss. The elevation head can then be expressed as:

The absolute vapor pressure of water at temperature 20 oC is 2.3 kN/m2. The maximum theoretical elevation of a pump when pumping water at 20 oC is therefore:

Due to head loss in the suction pipe and the local conditions inside the pump - the theoretical maximum elevation normally is significantly decreased.

Maximum theoretical elevation of a pump above an open tank at different water temperatures are indicated below.

Suction Head and Reduction in Suction Lift for Water and Temperature

Suction head for water - or max. elevation of a pump above a water surface - is affected by the temperature of the water - as indicated below:

Note! - as indicated in the table above hot water can be difficult to pump. To limit cavitation in a hot water system

Reduction in Suction Lift for Water and Altitude

Note that the NPSH specifications provided by manufacturers in general are for use with cold water. For hydrocarbons these values must be lowered to account for vapor release properties of complex organic liquids.

The head developed by a pump is independent of liquid and a performance curve for water can be used for Newtonian liquids like gasoline, diesel or similar. Note that the required power to the pump depends on the liquid density and must be recalculated.

NPSH and Liquids with Dissolved Gas

NPSH calculations might be modified if there is significant amount of dissolved gas in a liquid. The gas saturation pressure is often much higher than a liquid's vapor pressure.