An introduction to Centrifugal Pumps.

A centrifugal pump converts input power to kinetic energy by accelerating liquid in a revolving device - an impeller.

The most common is the volute pump - where fluid enters the pump through the eye of the impeller which rotates at high speed. The fluid accelerates radially outward from the pump chasing and a vacuum is created at the impellers eye that continuously draws more fluid into the pump. 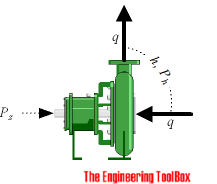 If the discharge of a centrifugal pump is pointed straight up into the air the fluid will pumped to a certain height -  or head - called the shut off head. This maximum head is mainly determined by the outside diameter of the pump's impeller and the speed of the rotating shaft. The head will change as the capacity of the pump is altered.

A pump does not create pressure, it only creates flow. The gauge pressure is a measurement of the resistance to flow.

The pump's performance on any Newtonian fluid can always be described by using the term head.

The head is measured in either feet or meters and can be converted to common units for pressure - like psi, Pa or bar.

The only difference between the fluids is the amount of power it takes to get the shaft to the proper rpm. The higher the specific gravity of the fluid the more power is required.

Note that the latter is not a constant pressure machine, since pressure is a function of head and density. The head is constant, even if the density (and therefore pressure) changes.

The head of a pump can be expressed in metric units as:

Pump efficiency, η (%) is a measure of the efficiency with which the pump transfers useful work to the fluid.