It is often necessary to adapt pump capacities to temporary or permanent changes in the process demand.

The capacity of a centrifugal pump can be regulated either at 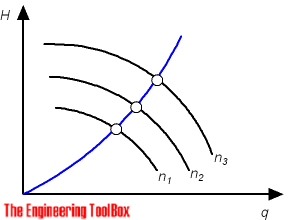 Speed modulation is energy efficient since the energy to the pump is reduced with by decreasing the impeller speed.

The speed of the pump can be varied with

The change in power consumption, head and volume rate can be estimated with the help of the affinity laws.

Capacity can be regulated at constant speed by

Throttling can be carried out by opening and closing a discharge valve. 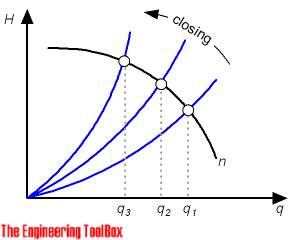 Throttling is energy inefficient since the energy to the pump is not reduced. Energy is wasted by increasing the dynamic loss.

The discharge capacity can be regulated by leading a part of the discharge flow back to the suction side of the pump. Bypassing the flow is energy inefficient since the energy to the pump is not reduced.

Reducing the impellers diameter is a permanent change and the method can be used where the change in process demand is not temporary. The method may be energy efficient if the motor is changed and the energy consumption reduced.

The change in power consumption, head and volume rate can be estimated with the help of the affinity laws.

The flow rate and the head can be modulated by changing the pitch of the blades. Complicated and seldom used. 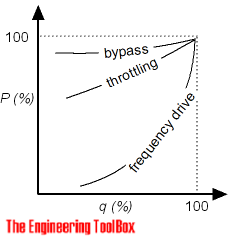