Mean Time Between Failure - MTB and reliability of machine components and systems.

Reliability characterizes components or system of components by the probability they will perform the desired functions for a given time.

Reliability at a given time:

t = time (hours) - Note! other units can be used as long as the use is consistent through the calculations.

The failure rate at time t can be expressed as

NF = No - Ns = number of failing components at time t

No = initial number of live components at time zero

A car manufacturer sells 400000 cars of a certain model in one year. During the the first tree years the owners of 50000 of these cars experience major failures. The failure rate can be calculated as

Unreliability - the Probability for a Device to Fail

The connection between reliability and unreliability:

(1) and (2) can be used to express unreliability

The number of live surviving components in a system at a given time:

The number of failure dead components in a system at a given time:

From the example above the failure rate is 0.42 per year. MTBF can be calculated as

Combining (5) with the formulas for reliability and more

MTBF vs. MTTF vs. MTTR

There are two basic types of reliability systems - series and parallel - and combinations of them. 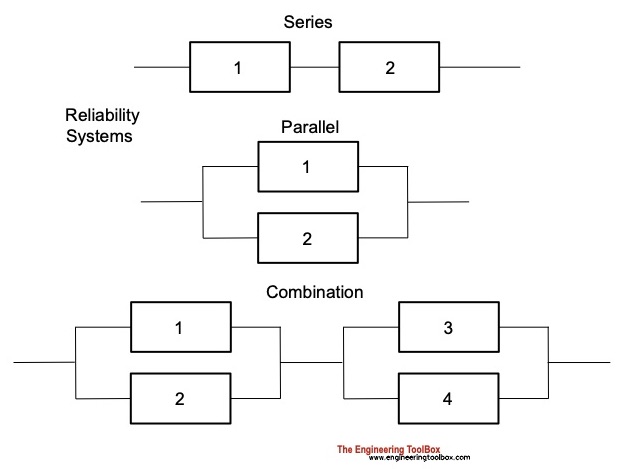 Reliability of Systems in Series

Reliability of systems in series can be expressed as

Example - Reliability of Systems in Series

From the example above the reliability of a car over three year is 0.88. If we depends on two cars for a mission - whatever it is - the reliability for our mission will be

Reliability of Systems in Parallel

Reliability of systems in parallel can be expressed as

Example - Reliability of Systems in Parallel

Note! - two systems in parallel with 99 % reliability vs. one system alone with reliability 88 % shows the power of redundancy.