Air flow - volume and velocity - due to stack or flue effect caused by indoor hot and outdoor cold temperature difference.

The temperature difference between the outside air and the inside air creates a "natural draft" forcing air to flow through the building. 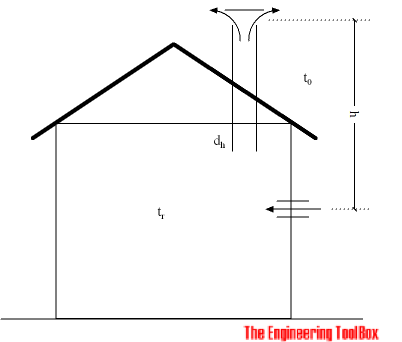 The natural draft head can be calculated as

Equation (1) can be modified to SI pressure units:

With air density 1.293 kg/m3 at 0oC - the air density at any temperature can be expressed as

Equation (1) above can easily be modified by replacing the densities with equation (2).

The calculator below can be used to calculate the natural draft pressure generated by the inside and outside temperature difference.

The calculator below can be used to calculate the air flow volume and velocity in a duct similar to the drawing above. The friction coefficient used is 0.019 which is appropriate for normal galvanized steel ducts.

Calculate the air flow caused by natural draft in a normal family house with two floors. The height of the hot air column from ground floor to outlet air duct above roof is approximately 8 m. The outside temperature is -10 oC and the inside temperature is 20 oC.

A duct of diameter 0.2 m goes from 1. floor to the outlet above the roof. The length of the duct is 3.5 m. Air leakages through the building are neglected. The minor coefficients are summarized to 1.

The density of the outside air can be calculated as

The density of the inside air can be calculated as

The velocity through the duct can be calculated as

The air flow can be calculated as

that these equations can be used for dry air, not for mass flow and energy loss calculations where air humidity may have vast effects. 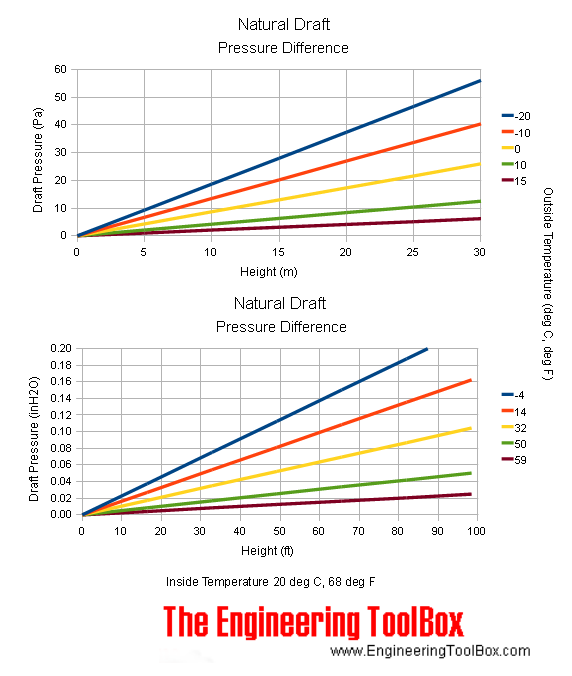