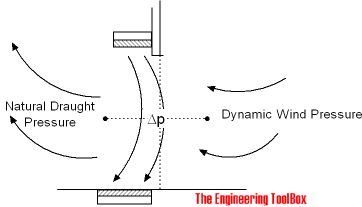 Forces acting on an opening in the wall

The forces acting on an opening like a door into a warehouse, mall or similar can be summarized to

The wind force acting on an opening in a wall is proportional to mass times velocity squared. The pressure at 10 m/s (36 km/h, 22 mph, Beaufort Fresh Breeze ) is 60 Pa.

By directing the airflow an angle out of the opening the natural draught and wind forces can be resisted. The "strength" of the air curtain follows the formula

An air curtain blowing twice the speed has four times the resisting power with the same air volume.

In general the discharge velocities should not exceed

For ware houses, shopping malls and similar buildings with openings up to 2.5 m the velocity should not exceed 5 - 9 m/s. For industrial buildings the velocity can be exceeded to 35 - 40 m/s.

The air volume required depends on many variables and an exact calculation may often be hard to perform. Values of 2000 - 5000 m3/h air per m2 door opening are common.

may even double the values. 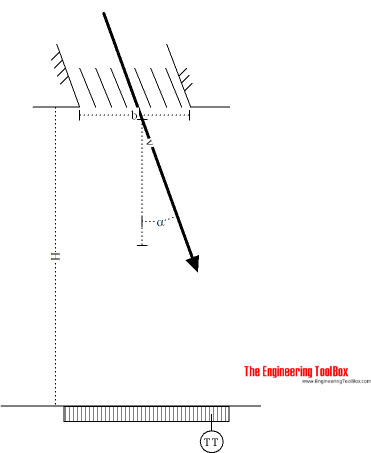 The "strength" of an air curtain is the maximum potential differential pressure it can resist. The potential pressure resistance generated by an airflow through an inlet opening can be expressed as

Δp = potential differential pressure over the opening in the wall (Pa, N/m2)

b = depth of discharge nozzle (m)

Note! The average air velocity is per meter opening width in wall. The velocity should not exceed the values mentioned above.

The calculator below can be used to estimate the strength of an air curtain by calculating the pressure difference and velocity in the air flow. Replace the default values with the actual values.

The velocity through the inlet can be calculated with (2) as

The forces we tries to compensate with air curtains constantly varies with outside temperature and wind velocity and some sort of control device modulating the air flow angle and air flow volume may be required.

A modulated control can be achieved with one or more temperature transmitters located as indicated in the figure above.

Air curtain discharge temperatures should be kept within certain limits. For winter conditions