When an object is heated or cooled, its length changes by an amount proportional to the original length and the change in temperature. The linear thermal expansion - the change in length - of an object can be expressed as

The final length of the object can be calculated as

Note! - linear expansion coefficients for most materials varies with temperature.

For wider temperature ranges - calculate for smaller spans and integrate the results.

Example - Expansion of an Aluminum Beam 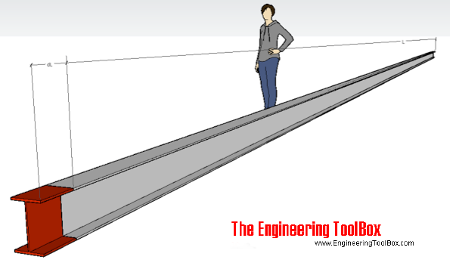 An aluminum construction is designed for temperatures ranging -30oC to 50oC. If a beam's length is 6 m when assembled at 20oC - the shortest final length of the beam at minimum temperature -30oC can be calculated as

The amount by which a unit area of a material increases when the temperature is raised by one degree is called the coefficient of superficial (area) expansion.

The amount by which a unit volume of a material increases when the temperature is raised by one degree is called the coefficient of cubic expansion.