The amount of air that can be dissolved in water increases with pressure and decreases with temperature.

Solubility of air in water can be expressed as a solubility ratio:

Solubility of air in water follows Henry's Law - "the amount of air dissolved in a fluid is proportional to the pressure in the system" - and can be expressed as:

where
c= solubility of dissolved gas
kH= proportionality constant depending on the nature of the gas and the solvent
pg= partial pressure of gas (Pa, psi)

Solubility of Air in Water

Solubility of air in water - expressed as ratio of absorbed air volume to water volume: 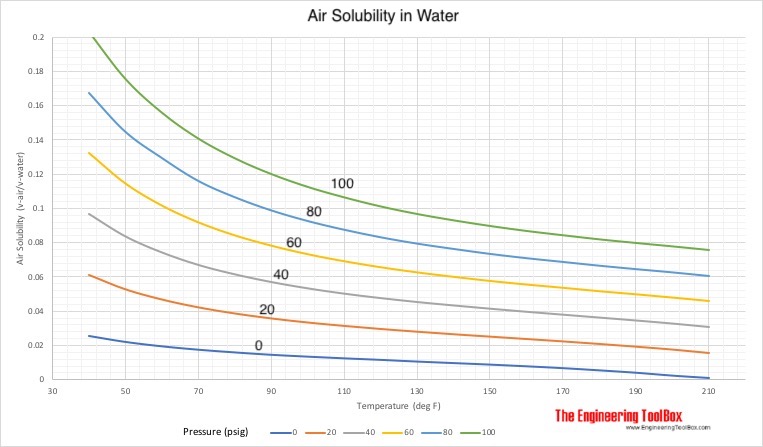 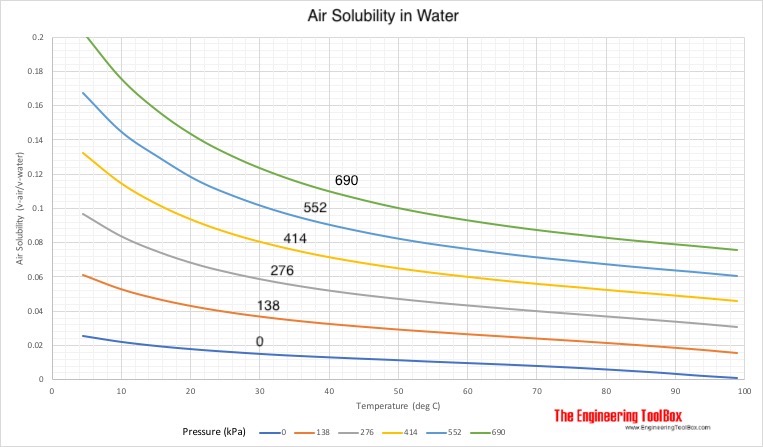 The amount of air dissolved in water - mass of air to volume/mass of water - can be calculated with Henry's law.

Henry Law's Constants at a system temperature of 25oC (77oF)

Oxygen dissolved in the Water at atmospheric pressure can be calculated as:

Nitrogen dissolved in the Water at atmospheric pressure can be calculated as:

Since air mainly consists of Nitrogen and Oxygen - the air dissolved in the water can be calculated as:

Calculating the air dissolved in water for some other pressures at temperature 25oC (77oF) can be summarized to: 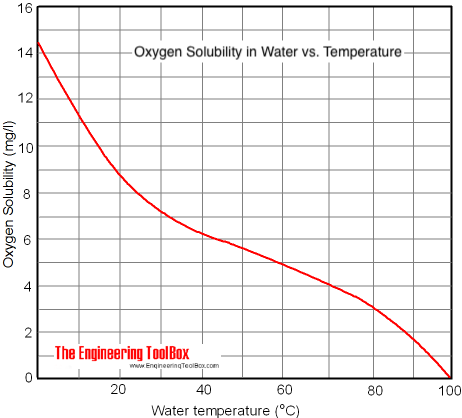 For maximum deaeration the water should be heated up to 212 oF (100 oC) at atmospheric pressure. This is common in steam systems where fresh water is supplied to the system through a heated deaeration tower on the top of the condensate receiver tank.

It is also common to install deaeration devices on the hot sides of heat exchangers in heating distribution systems to force the dissolved air out of the system.

Note! Since the maximum deaeration is limited by the minimum static pressure and maximum temperature in the system - the best deaeration result is achieved in positions at the hottest and highest levels of the systems - and/or at the suction side of pumps.