The friction theory and friction coefficients at different conditions for various of materials like ice, aluminum, steel, graphite and other common materials and materials combinations

The friction force is the force exerted by a surface when an object moves across it - or makes an effort to move across it.

The frictional force can be expressed as

There are at least two types of friction forces 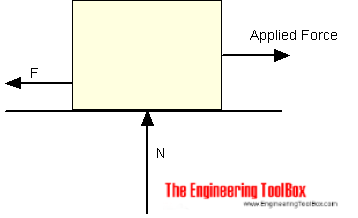 For an object pulled or pushed horizontally the normal force - N - is simply the gravity force - or weight:

Friction Coefficients for some Common Materials and Materials Combinations

Kinetic or sliding frictional coefficient only when there is a relative motion between the surfaces.

Note! It is commonly thought that the static coefficients of friction are higher than the dynamic or kinetic values. This is a very simplistic statement and quite misleading for brake materials. With many brake materials the dynamic coefficient of friction quoted is an "average" value when the material is subject to a range of sliding speeds, surface pressures and most importantly operating temperatures. If the static situation is considered at the same pressure, but at ambient temperature, then the static coefficient of friction is often significantly LOWER than the average quoted dynamic value. It can be as low as 40 - 50% of the quoted dynamic value.

A 100 lb wooden crate is pushed across a concrete floor. The friction coefficient between the object and the surface is 0.62. The friction force can be calculated as

Note! - The friction work required to stop the car is equal to the kinetic energy of the car.

The kinetic energy of the car is

The friction force Ff can be calculated from (3)