The temperature and density of the air influences on the volume flow, pressure head and power consumption in a fan.

Density of air varies with temperature and pressure (or altitude or elevation above sea level) and a fan will not deliver according manufactured specifications if operating conditions are outside NTP - Normal Temperature and Pressure Conditions.

Manufactured specifications for fans are in general based on the

A fan is a "constant volume" device where the volume in the fan - and the transported air volume through the fan - is always the same (with same fan speed and size).

The examples below may clarify the procedures:

A drying process requires 1 m3/s air at normal conditions 20 oC. The fan operates when the air is heated to 80 oC. The required volume capacity in the fan at operating conditions can be calculated using 1b as

The fan must be selected for volume flow 1.2 m3/s (and whatever the pressure loss in the system is).

The ratio between developed pressure at different temperatures can be expressed as:

With temperature higher than the reference temperature - the volume flow is higher and the required pressure developed in the fan is higher.

The ratio between power consumption at different temperatures can be expressed as:

The volume, pressure and power ratios are expressed in the chart below. The chart is based on a NTP reference with temperature of 20 oC. 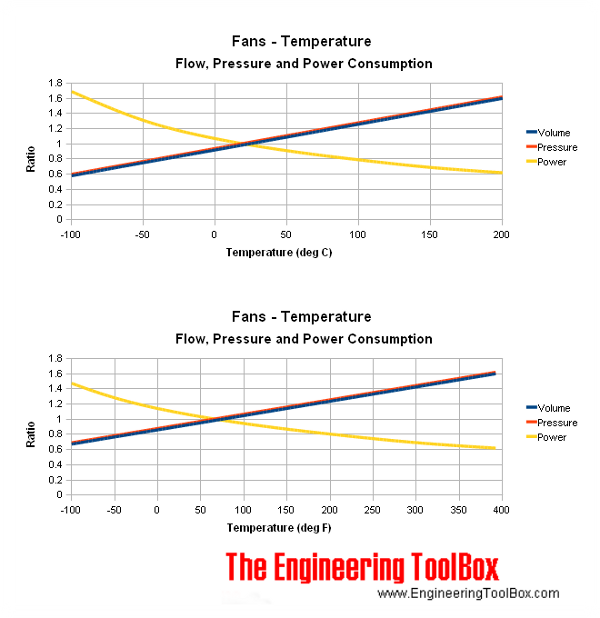 The calculator below can be used to estimate the volume, pressure and power ratios at different temperatures. The default values are based on NTP conditions.

Decide the correct air volume and pressure for choosing a fan from the manufacturers data. Decide the power consumption.

Since the air volume is estimated for the hot air, the correct volume for the fan is 10000 m3/h.

The pressure coefficient is approximately 1.15 for air at 60 oC according the chart. The correct pressure in the manufacturing data sheet should be

Note!  - do not compensate the pressure developed by the fan if the pressure loss in the system is estimated on the basis of normal charts based on air with density 1.2 kg/m3.

10000 m3/h of normal standard air at 20 oC shall be transported at an operating combustion air temperature of 180 oC. The total pressure developed at 180 oC is estimated to 500 Pa.

The volume coefficient in the chart above is 1.55 at 180 oC. The operating volume flow for selecting the fan would be

The pressure coefficient for air at 180 oC is approximately 1.55 according the chart. The correct pressure used in the manufacturing data sheet should be

Note! - the power consumption is lower in operating condition than during start up. A motor (and the motor protection) should in general be big enough to handle higher start up power consumption.

Remember! If a fan starts with temperatures below 20 oC (NTP) - the power consumption will be higher than specified in the catalogue - and the fan may be stopped by the electrical overload protection. The power consumption during start up can be reduced by limiting the volume flow with a closing damper on the outlet of the fan.