An introduction to the basic design of steam heating systems.

The simplest steam heating system can installed at relative low costs. The disadvantages with the simple system is the lack of modulating quality.

The simplest steam heating system is the 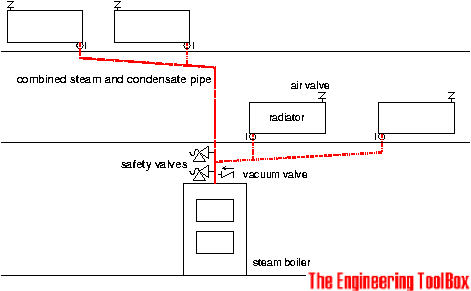 Steam and condensate use the same main pipes. The condensate flows in the opposite direction of the steam.

Air valves are necessary for evacuating air during start-up.

The system is simple but the heat emission from radiators or in heat exchangers is hard to control. Modulating the heat will cause the heating elements to be partly filled with air. The system can work properly in applications where the heat can be modulated directly in the boiler, like applications for warehouses, garages and so on. The system should be avoided where individually modulating of each radiator or heat exchanger is required.

The condensate draines back to the boiler and during stops the system is filled with air. This makes the design suitable for temporarily heated application working under water freezing conditions.

The simple system can be modified to the 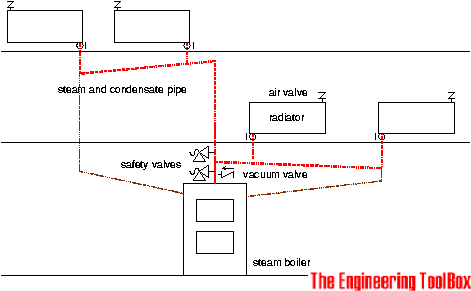 This is a better design than the former because the steam and condensate are more separated in different pipes. It can be further improved with the 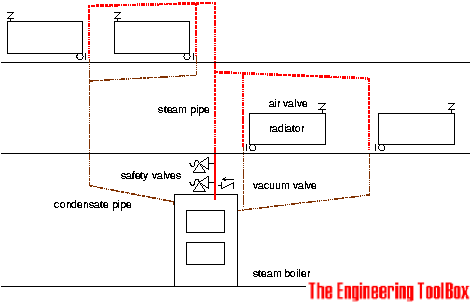 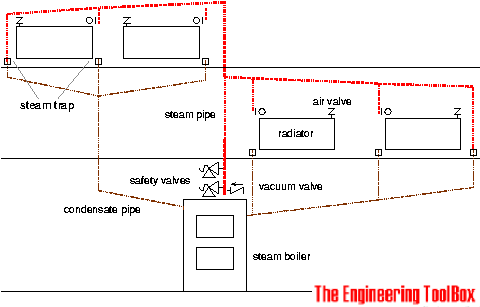 With the Steam Trap System steam is hold back in the heating elements and the steam pipes by steam traps. Steam traps may work after thermodynamic or mechanical principles.

The advantage with the system is better individual modulated radiators and heat exchangers.

The disadvantage is more equipment and higher costs.