A series circuit has only one path for the electrons to flow. 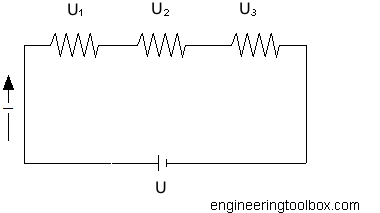 U = applied voltage from the battery or source (volts, V)

According rule 1 the currents in a series circuit are equal. This can be expressed as

The current in the series circuit can be calculated as

The power dissipated in the circuit can be calculated