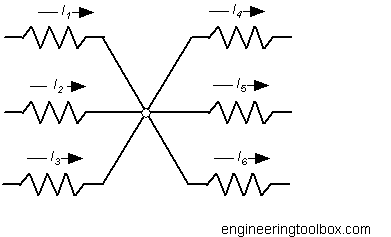 Kirchhoff's Current Law can be expressed as

I6 can be calculated by using Kirchhoff's current law

In a closed loop in a network the sum of the voltage drops or potential differences around the loop is zero.

Kirchhoff's Voltage Law can be expressed as

In a schematic diagram voltage can be measured positive clockwise or anticlockwise.