Pascal's Laws relates to pressures in fluids - in liquid or gaseous state:

Example - Pressure in a Hydraulic Cylinder

The pressure of 2000 Pa in an hydraulic cylinder acts equally on all surfaces. The force on a piston with area 0.1 m2 can be calculated

Example - Force in a Hydraulic Jack 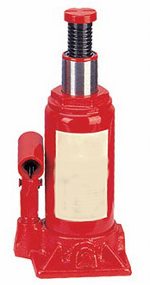 The pressure acting on both pistons in a hydraulic jack is equal. 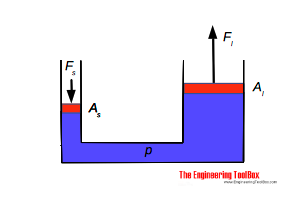 The force equation for the small cylinder:

Fs = force acting on the piston in the small cylinder (N)

The force equation for the large cylinder:

Fl = force acting on the piston in the large cylinder (N)

- free apps for offline use on mobile devices.

A Hydraulic Jack Lifting a Car

The back end (half the weight) of a car of mass 2000 kg is lifted by an hydraulic jack where the As / Al ratio is 0.1 (the area of the large cylinder is 10 times the area of the small cylinder).

The force - weight - acting on the large cylinder can be calculated with Newton's Second Law:

a = acceleration of gravity (m/s2)