Full load operating torque vs. break down, pull up and locked rotor torque.

Torque is the turning force through a radius - with the units Nm in the SI-system and the units lb ft in the imperial system.

The torque developed by an asynchronous induction motor varies when the motor accelerates from zero to maximum operating speed. 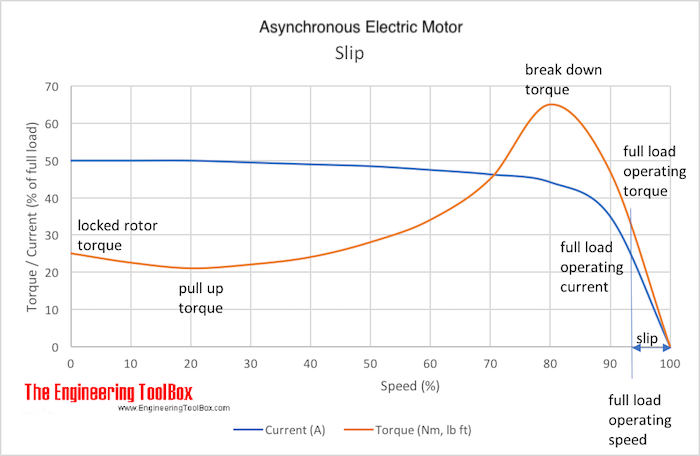 The Locked Rotor Torque or Starting Torque is the torque an electrical motor develops when starting at zero speed.

A high Starting Torque is more important for application or machines hard to start - like positive displacement pumps, cranes etc. A lower Starting Torque can be accepted for centrifugal fans or pumps where the start load is low or close to zero.

The Pull-up Torque is the minimum torque developed by an electrical motor when it runs from zero to full-load speed (before it reaches the break-down torque point).

The pull-up torque may be critical for applications that needs power to go through some temporary barriers achieving working conditions.

The Break-down Torque is the highest torque available before the torque decreases when the machine continues to accelerate to working conditions.

The Full-load Torque is the torque required to produce the rated power of an electrical motor at full-load speed.

In imperial units the Full-load Torque can be expressed as

In metric units the rated torque can be expressed as

The torque of a 60 hp motor rotating at 1725 rpm can be calculated as:

Reduced Voltage Soft Starters are used to limit the start current reducing the Locked Rotor Torque or Starting Torque and are common in applications which is hard to start or must be handled with care - like positive displacement pumps, cranes, elevators and similar.