Capacitors and capacitance - charge and unit of charge.

A capacitor is a device used to store electrical energy. 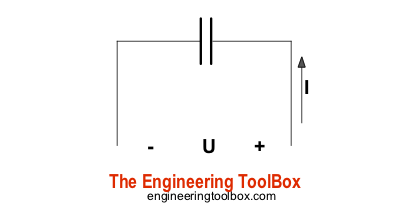 The plates of a capacitor is charged and there is an electric field between them. The capacitor will be discharged if the plates are connected together through a resistor.

Charge of a Capacitor

The charge of a capacitor can be expressed as

The smallest charge that exists is the charge carried by an electron, equal to -1.602 10-19 coulomb.

If a current of 5 amp flows for 2 minutes, the quantity of electricity - coulombs - can be calculated as 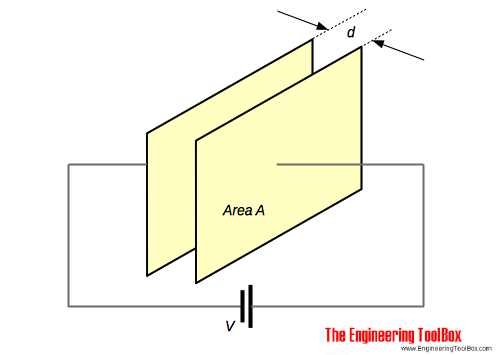 The voltage between two plates is 230 V and the distance between them is 5 mm. The electric field strength can be calculated as

A = surface area of the capacitor (m2)

From (4) the capacitance can be expressed as

One farad is defined as the capacitance of a capacitor when there is a potential difference across the plates of one volt when holding a charge of one coulomb.

Example - Voltage over a Capacitor

A 5 µF capacitor is charged with 10 mC. The voltage across the capacitor can be calculated by modifying (4) to

The actual permittivity can be calculated by transforming (7a) to

The capacitance of a plate capacitor - as shown in the figure above - is proportional with the area A of the plate. The capacitance can be expressed as

Example - Capacitance of a Plate Capacitor