An basic introduction to the ultrasonic Doppler and Time of Flight Flow Meters.

The Doppler Effect Ultrasonic Flow meter use reflected ultrasonic sound to measure the fluid velocity. By measuring the frequency shift between the ultrasonic frequency source, the receiver, and the fluid carrier, the relative motion are measured.

The resulting frequency shift is named the Doppler Effect. 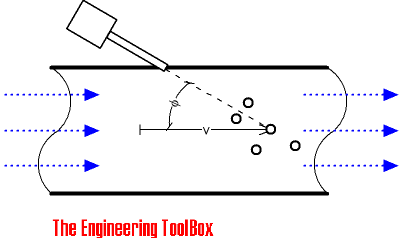 Fluid velocity can be calculated as

c = velocity of sound in the fluid .. more about speed of sound

This method require there is some reflecting particles in the fluid. The method is not suitable for clear liquids.

Doppler meters may be used where other meters don't work. This might be liquid slurries, aerated liquids or liquids with some small or large amount on suspended solids. The advantages can be summarized to:

The Doppler flow meters performance are highly dependent on physical properties of the fluid, such as the sonic conductivity, particle density, and flow profile.

Non uniformity of particle distribution in the pipe cross section may result in a incorrectly computed mean velocity. The flowmeter accuracy is sensitive to velocity profile variations and to the distribution of acoustic reflectors in the measurement section.

Unlike other acoustic flow meters, Doppler meters are affected by changes in the liquid's sonic velocity. As a result, the meter is also sensitive to changes in density and temperature. These problems make Doppler flowmeters unsuitable for highly accurate measurement applications.

With the Time of Flight Ultrasonic Flow meter the time for the sound to travel between a transmitter and a receiver is measured. This method is not dependable on the particles in the fluid.

Two transmitters / receivers (transceivers) are located on each side of the pipe. The transmitters sends pulsating ultrasonic waves in a predefined frequency from one side to the other. The difference in frequency is proportional to the average fluid velocity.

The fluid velocity can be expressed as

The operating principle for the ultrasonic flow meter requires reliability high frequency sound transmitted across the pipe. Liquid slurries with excess solids or with entrained gases may block the ultrasonic pulses.