One of the most common industrial thermometer is the thermocouple. It was discovered by Thomas Seebeck's in 1822. He noted that a voltage difference appeared when the wire was heated at one end. Regardless of temperature, if both ends were at the same temperature there was no voltage difference. If the circuit were made with wire of the same material there was no current flow.

A thermocouple consists of two dissimilar metals, joined together at one end, and produce a small unique voltage at a given temperature. This voltage is measured and interpreted by a thermocouple thermometer.

The thermoelectric voltage resulting from the temperature difference from one end of the wire to the other is actually the sum of all the voltage differences along the wire from end to end.

Thermocouples can be made from a variety of metals and cover a temperature range 200 oC to 2600 oC. Comparing thermocouples to other types of sensors should be made in terms of the tolerance given in ASTM E 230. 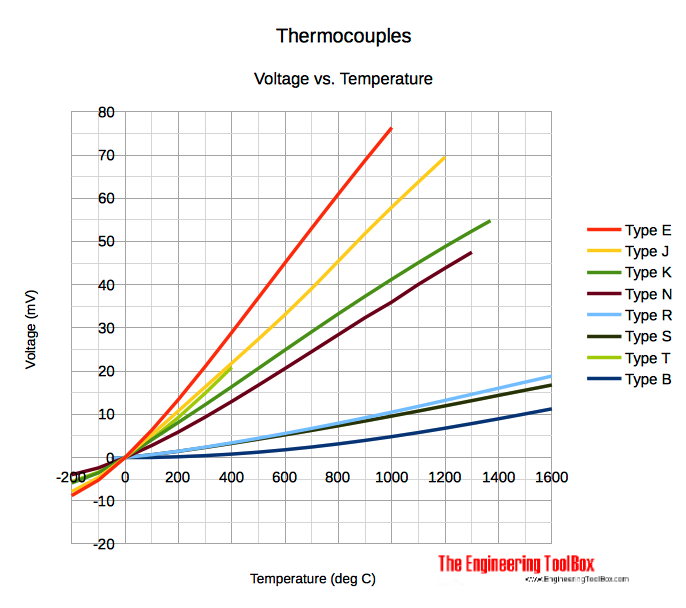 Thermocouples are available in different combinations of metals or calibrations. The four most common calibrations are J, K, T and E. Each calibration has a different temperature range and environment, although the maximum temperature varies with the diameter of the wire used in the thermocouple.

Some of the thermocouple types have standardized with calibration tables, color codes and assigned letter-designations. The ASTM Standard E230 provides all the specifications for most of the common industrial grades, including letter designation, color codes (USA only), suggested use limits and the complete voltage versus temperature tables for cold junctions maintained at 32 oF and 0 oC.

There are four "classes" of thermocouples:

The home bodies are the Types E, J, K, N and T. The upper crust are types B, S, and R, platinum all to varying percentages. The exotic class includes several tungsten alloy thermocouples usually designated as Type W (something).