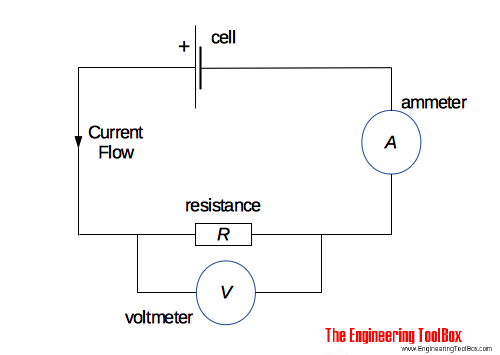 An ampere is the current which - if maintained in two straight parallel conductors of infinite length - of negligible circular cross section, and placed 1 meter apart in vacuum, would produce between these conductors a force equal to 2 x 10-7 Newton per meter of length.

Electric current is the same as electric quantity in movement, or quantity per unit time:

I = electric current (ampere, A)

Ampere can be measured with an "ammeter" in series with the electric circuit.

The standard unit of quantity in electrical measurements. It is the quantity of electricity conveyed in one second by the current produced by an electro-motive force of one volt acting in a circuit having a resistance of one ohm, or the quantity transferred by one ampere in one second.

The farad is the standard unit of capacitance. Reduced to base SI units one farad is the equivalent of one second to the fourth power ampere squared per kilogram per meter squared (s4 A2/kg m2).

When the voltage across a 1 F capacitor changes at a rate of one volt per second (1 V/s) a current flow of 1 A results. A capacitance of 1 F produces 1 V of potential difference for an electric charge of one coulomb (1 C).

The derived SI unit of electrical resistance - the resistance between two points on a conductor when a constant potential difference of 1 volt between them produces a current of 1 ampere.

The Henry is the unit of inductance. Reduced to base SI units one henry is the equivalent of one kilogram meter squared per second squared per ampere squared (kg m2 s-2 A-2).

An inductor is a passive electronic component that stores energy in the form of a magnetic field.

The unit of energy work or quantity of heat done when a force of one Newton is applied over a displacement of one meter. One joule is the equivalent of one watt of power radiated or dissipated for one second.

In imperial units the British Thermal Unit (Btu) is used to express energy. One Btu is equivalent to approximately 1,055 joules.

The unit of electrical conductance S = A / V

The unit of power W or joule/second

The unit of magnetic flux.

The flux that when linking a circuit of one turn, produces an Electro Motive Force - EMF - of 1 volt as it is reduced to zero at a uniform rate in one second.

The unit of magnetic flux density the Tesla is equal to 1 Weber per square meter of circuit area.

The volt - V - is the Standard International (SI) unit of electric potential or electromotive force. A potential of one volt appears across a resistance of one ohm when a current of one ampere flows through that resistance.

Reduced to SI base units,

A "voltmeter" can be used to measure voltage and mus be connected in parallel with the part of the circuit whose voltage is required.