Various protection techniques and methods are required for electrical installations and equipment in hazardous (classified) locations to reduce and minimize potential risk of explosion or fire.

A dust ignition proof component prevents dust entering from outside. Arcs, sparks and heat generated inside of the enclosure will not be able to ignite the exterior surroundings near the component.

An explosion proof component is capable to keep an internal explosion of a specific flammable air-vapor mixture within the component enclosure without releasing burning or hot gases to the external environment which may be potential explosive. The explosion proof equipment must also operate below safe temperatures.

An intrinsically safe component is incapable of releasing sufficient electrical or thermal energy to cause ignition of a specific hazardous substance under normal or abnormal (fault) operating conditions. (ISA-RP12.6 - Wiring Practices for Hazardous Area Instrumentation)

In simple terms this means that intrinsically safe equipment and wiring will limit electrical and thermal energy to a level below what required to cause start an explosion.

Intrinsically safe equipment operates on low power levels. Safety barriers are grounded to be effective under fault conditions and intrinsic safety is provided through voltage and current limiters. Zener diodes and resistors limiting the energy are usually mounted away from the hazardous areas. Failure to replace enclosure covers or bolts will not imperil protection.

Note! Intrinsically safety can be compromised after initial installation due to improper maintenance or repair. It is important to ensure that such works are carried out properly.

Non incendive components are non-sparking and incapable of releasing sufficient electrical or thermal energy to cause ignition of a hazardous substances under normal operating conditions.

Protection applied by encasing the components in a resin type material.

The protection is referred to as "Ex m".

Sub divisions ma for Zone 0 and mb for Zone 1.

This protection is referred to as "Ex d".

Electrical equipment is under normal or abnormal conditions incapable of releasing sufficient electrical or thermal energy to cause a ignition of the hazardous surrounding atmospheric mixture.

This protection is referred to as "Ex i".

High quality and very robust components. Various measures are applied to reduce the probability of excessive temperatures and the occurrence of arcs or sparks in the interior and on the external parts of the equipment. Increased safety may be used with flame-proof type of protection.

The protection is referred to as "Ex e".

Protection applied by submerging the components in oil.

The protection is referred to as "Ex o".

Protection applied by keeping a positive pressure in the enclosure relative to the surrounding atmosphere with air or an inert gas. With an overpressure monitored, maintained and controlled - the surrounding ignitable atmosphere can not come in contact with energized parts of the apparatus.

The protection is referred to as "Ex p".

Sub divisions px or py for Zone 1 and pz for Zone 2.

Protection applied by covering the components with sand, powder or quartz.

The protection is referred to as "Ex q".

A protection applied to electrical equipment in such a way that normal operation is not capable of igniting surrounding explosive atmospheres.

The protection is referred to as "Ex n".

Any method which can be shown to have the required degree of safety.

The protection is referred to as "Ex s".

A product with temperature code T3 has a maximum surface temperature below 200oC - provided it is operated within the ambient temperature specified by the manufacturer.

Approved equipment is marked according rated Class (I, II, or III), Division (1 or 2), Group (A, B, C, D, E, F, or G) and temperature code (T1 through T6). For intrinsically safe equipment the words “Intrinsically Safe” or “IS” precedes the actual approval marking.

Approved equipment is marked according to the designed protection concept (Ex i, Ex d, Ex n and etc.), the group (I, IIA, IIB, IIC, IIIA, IIIB or IIIC) and temperature code (T1 through T6). For the United States it will be preceded by approved Class and Zone. 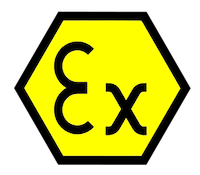 Electrical equipment for use in hazardous areas need to be certified by an approval agency.

In North America certification is provided by